Ever heard of makgeolli? It’s a beverage that is integral to the culture of Korea, where it has been brewed for 2 000 years.

Considered the drink of the people, makgeolli is a rice wine with a milky texture and appearance and a deliciously rich, tangy flavour. Interestingly, makgeolli is brewed using nuruk, a fermented wheat cake that gives the drink a taste and an aroma typical of the area where the wheat used was harvested. Generally served in a small bowl, makgeolli can be enjoyed on its own or paired with bold flavoured dishes, such as the ones found in Korean cuisine.

The globetrotters at Vrooden Brewery have long dreamed of making their own makgeolli to introduce it to our little corner of the world, especially Carol Duplain, who fell in love with this beverage during his trips to Korea. 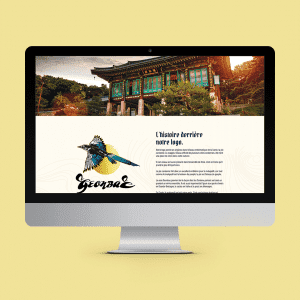 Well, just as Vrooden is about to celebrate its 5th birthday, the dream has come true: the team will soon be launching Geonbae, the makgeolli made in Québec!

Agence Rinaldi is proud to have designed the label as well as the webpage for Geonbae (geonbae, by the way, is pretty much the equivalent of Cheers! in Korean).

If you know us, then you won’t be surprised to learn that the team can’t wait to let out a « Geonbae » while raising a glass of makgeolli to the health of our friends at Vrooden!